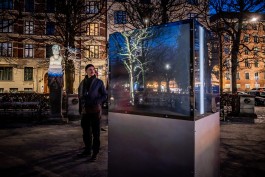 In ‘Space Eraser’ one is presented with an erected structure standing alone as a monument - rather than commemorating a person or event it reflects our presence in the surrounding space.

Resembling the movement of a lighthouse, a light inside the structure projects a moving lit boundary into the reflected images. Due to the high luminosity of the light source, certain areas of the reflection disappear in a given moment.

The installation works with the duality between the ability of light to illuminate and blur details - an issue as we know it from many cities, where lighting that is actually thought of as something that enables modern life often ends up blurring and cutting us off from the nuances of our surroundings such as the natural light of the night sky.